In 1919 Father Kentenich was relieved of his office as Spiritual Director of the College so that he could be free to support the development of the Apostolic Federation.

His successor was Fr Friedrich Mühlbeyer who quickly won the trust of the boys.

Fr Mühlbeyer worked in the spirit of the former Spiritual Director. This showed, for example, in the Sodality Chronicle which reported at the end of the 1919/20 school year.

To everyone’s regret, Fr Mühlbeyer was relieved of his office after two years. After the Summer vacations of 1921 a change took place which had serious consequences.

The new Sodality leader, Fr Roettgen, had little understanding for the way the Marian Sodality had worked until then. This corresponded to the standpoint of the Provincial Superior in Limburg. From 1919-1922 Fr Lettenbauer took over Fr Kolb’s office. He also did not like the existence and work of the Marian Sodality in Schoenstatt, nor did he like the shrine. Here he was in accord with Fr Roettgen. Three years later another Provincial Superior, Fr Laqua, took over this office, and he appointed a new Spiritual Director for the College.

As the new Spiritual Director, Fr Röttgen could not sympathize with the Sodality or the shrine. So he tried to put an end to the whole affair. He saw to it that the shrine was put off bounds for the boys in the College. He was unable to close the shrine itself since it had been placed at the disposal of the Apostolic Federation. However, he fenced it off to prevent the boys from paying a visit to the shrine. The boys themselves were forced into a conflict that was very difficult for them to bear. The fact that the long drawn out conflict was never mentioned in the chronicle testifies to the great discipline of the boys. The whole affair was passed over and hidden. Verbal accounts, for example, from Franz Bezler, later Fr. Bezler, the extent of the confrontation is clearly revealed. He related how the boys crept through the fence and so entered the shrine. The tense situation could not be borne for long.

Fr Roettgen resigned after a year, and a new name entered the chronicle with the appointment of his successor. Fr Roettgen was transferred away from Schoenstatt.

Fr Valerius was able to set up a relationship of trust with the boys, the Sodality and the shrine, and all the restrictions were removed.

These events led to new reflection about the Sodality in the College. The result was that the Marian Sodality, as it had existed until then, was dissolved in 1924 after ten years’ existence. Its members and those who were interested in it were transferred as a section into the Federation and League of the Apostolic Movement.

New Improvements to the Shrine in 1924

Father Kolb gave a summary of the changes made in 1924. He mentioned the addition of a thin inner wall, which reduced the inner dimensions by about 10 cm.

In order to arrive at the greatest possible clarity about the changes made in 1924, a small hole (about 10 cm in circumference) was bored into the wall behind the altar on16.11.2001. The material this produced unfortunately gave no clue about the colour of the wall, although it did reveal how the wall had been built. It seems certain that in 1924 a black, corrugated tarred paper was applied to the surface in order to keep out the damp. It added about 1 cm to the thickness of the wall. This was then covered with a 3 cm plaster. This in turn was covered by something like a plaster of Paris mixture which gave a smooth, white surface. In this way the wall was given an additional 5 cm covering. Unfortunately the ventilation pipes mentioned by Fr Kolb could be discovered.

The new wall in its turn was painted white right up to the ceiling, as was done already in 1919, and no longer had coloured ornamentation. Although it was planned that the shrine should be decorated again, this was put off until the planned enlargement had taken place.

These renovations meant that the inner dimensions of the shrine had changed slightly in the ten years since 1914. Ten years later, in 1934, a further important change took place when the new altar was put up in the shrine. The simple pine floor laid in 1924 was replaced by a stronger parket floor, which was covered a few years later with light linoleum, and then with red linoleum.

In 1924 Josef Fischer, the first Prefect of the Marian Sodality in the College at Schoenstatt, was working as assistant priest in Hechingen, in the Archdiocese of Freiburg. From there he wrote a “Section Letter” to the Federation priests of his diocese. It is not dated, but we again read in it about plans to enlarge and change the shrine. They were never carried out for various reasons. To start with, it seemed more urgent that a Home for the Federation should be built. Later there wasn’t enough money, and finally the idea was scrapped out of ideological reasons. The new Home for the Federation was blessed on 15 August 1928.

A further report is quoted here because it announced the changes around the shrine.

In1929 15 years had passed since the founding event in 1914, when on 18 October 1914 the Chapel of St Michael became a new Marian Shrine. During 1929 Fr Kentenich summed up his observations over the past years on a number of occasions, and formulated his conviction founded on faith that the shrine had a God-willed role to play for the destiny of the Church in the time to come.

On the Silver Jubilee day itself, 18 October 1929, he responded to a request from a course of the Sisters of Mary and gave them a talk in the shrine in which he interpreted the the signs of Divine Providence. In this talk he mentioned the events that had taken place immediately before this day, that is, the blessing of the new Home for the Federation on 15 August 1928, and his statement about the “shadow of the shrine”.

In1956, while Fr Kentenich was in exile in Milwaukee, he was struggling to give the Pallottine Superior General an understanding of the mission of the Schoenstatt shrine. In a study in the form of a letter, which covered hundreds of pages, he recalled its history. In the process he mentioned the years 1928 and 1929 and quoted documents relating to the important events and their interpretation in these two years.

In the talk he gave on 18 October 1929 Fr Kentenich described his observations, and noted how important the shrine had already become to the Pallottine Society, to many diocesan priests, for communities of religious, for men and women. Through observing these fruitful developments he dared to take a look into the future and expressed his belief: If the Blessed Mother continued the fruitfulness that had already begun in the above-mentioned directions, his expectation would be fulfilled that “in the shadow of the shrine” the destiny of the Church would be essentially decided for the time to come.

The reports are given here exactly as they were written in the style of those times.

From the Old Towers to the New

A Walk through Schoenstatt 1933 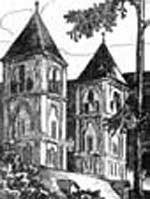