The boys in the College got the idea to bring back the remains of Hans Wormer and Max Brunner, who had fallen in France during the First World War, and to give them their final resting place beside the shrine. They also hoped to find Joseph Engling's remains. They succeeded with the first two, but Joseph Engling's grave has never been found. Long reports record this undertaking in the periodicals published in 1934 and 1935, and report in detail on what happened.

Feast of the Assumption 1934

A report in the “Altera Maria”, 4th Year 1934/35 about the solemn Holy Mass in Schoenstatt to celebrate the return of Max Brunner and Hans Wormer to Schoenstatt.

Extract from a circular letter printed in “Altera Maria” (1934/35) on our Jubilee Feast 1934 in Schoenstatt.

The statues of the Apostles and the second crown

Mary “Queen of the Apostles”.

Report from “Schönstattquell” in the Joseph Engling Year 1936 about the blessing of the Engling Stone.

The Jubilee Crowning and the Third Crown

Looking back on the crowning of the Mta in 1939. 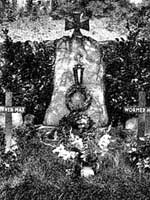