A picture of the interior of the shrine, which was taken after 1919 (with the light frame made by Fritz Esser) and before 1934 (without the new altar), you can see a statue of St Aloysius on the left corner cupboard, and St John Berchmans on the right corner cupboard.

Franz Hosenberg, group representative of the Engling Group in Schoenstatt, wrote to Joseph Engling on 4.6.1918: “Inside the shrine the statues of the Sacred Heart of Jesus and Mary have been replaced by the statues of St Aloysius and John Berchmans.“

Unfortunately we know nothing about the background to this exchange. In a letter of 23.11.1917 from Albert Eise we still read: “… the two statues of the Sacred Heart of Jesus and mary still arouse devotion.“ It has not been possible to discover when exactly the exchange took place.

On 19 March 1927 the Sisters of Mary replaced the statue of St Aloysius with one of St Joseph. A photo of the interior of the shrine with its Christmas decoration (taken on 13.1.1928) shows the statue of St Joseph on the left hand cupboard. St Aloysius was moved to the right hand cupboard and St John Berchmans had to leave the shrine. It is not known where this statue went.

St Aloysius remained at his place until 21.1.1951, when he had to give way to a Pallotti group when the latter was canonized. In what is probably the oldest gramophone recording of Fr Kentenich’s voice made in 1949, he mentions that in future the statue of St Vincent Pallotti would replace that of St Aloysius in the shrine.

St Joseph has remained on the left hand cupboard until today. In 1927 the first statue was brought into the shrine. In 1934 it was replaced by a second, and since 19.3.1953 by the third, and present, statue presented by the Pallottine Brothers. They wanted to depict St Joseph as the protector of the Church. The statues of St Aloysius and St Joseph can be found today in the shrine of the Sisters of Mary on Mount Schoenstatt. 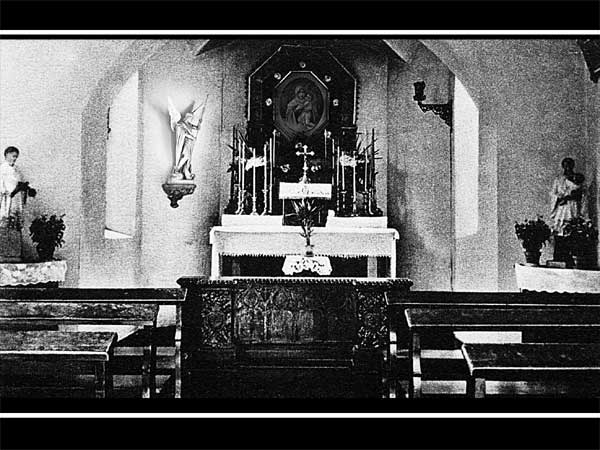